Crash Report - BUNO 155460
After completing his tour of duty with The Black Ponies in Vietnam, Plankowner Lt. Bill "Flash" Leebern returned to NAS North Island as an Instructor for the Replacement Air Group pilots that were enroute to Vietnam.

On August 7, 1970 Lt. Thomas P. Lange was in the front seat and Flash was in the back seat of OV-10A BUNO 155460. It was a clear day for flying around San Diego - wind was 200/3, 74 degrees F. dew point 72 with 6 miles visibility. According to a witness, the aircraft was pretty much alone in the pattern and had all ready completed several 'Touch & Gos'. 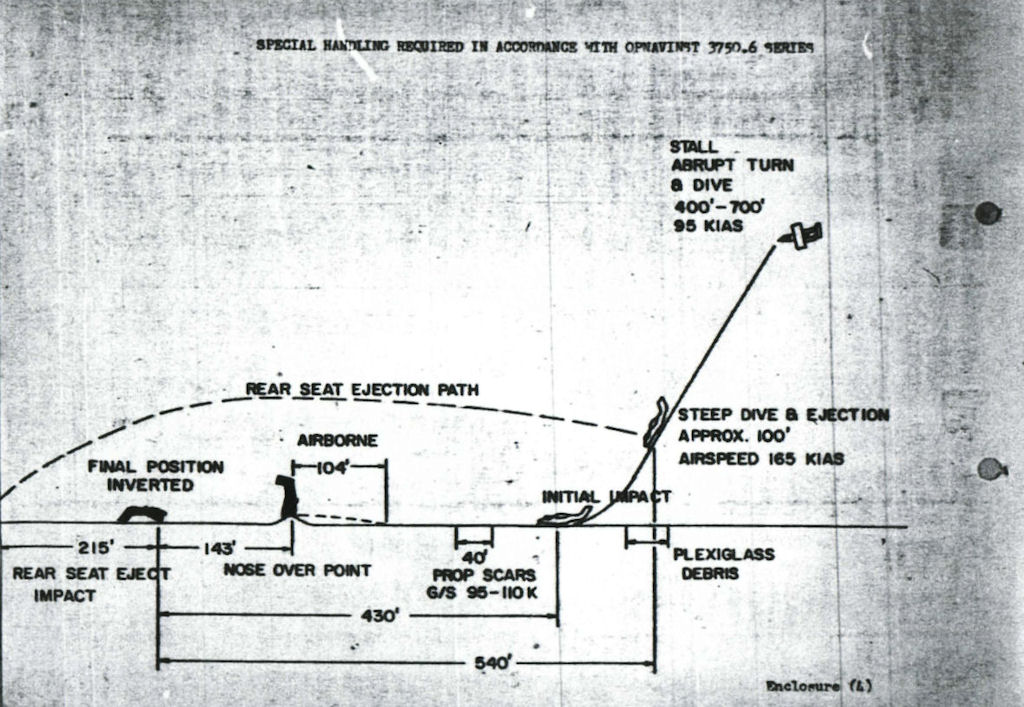 The Crash at NAS North Island - August 7, 1970
By Jim Hunter ~ eyewitness to the VS-41 OV-10A training incident that took place at Naval Air Station North Island.

Jim Hunter's original account of this incident was posted on the OV-10 Bronco Association's Website in 1999. It seems now that the ov-10bronco.net site no longer exists.

Your foot note of a crash of an OV-10 Bronco at NAS North Island on 08/07/70 brought back some vivid unpleasant memories of that tragic event. Along with a number of other naval personnel, that beautiful sunny August weekend day involved placing my observations on paper as an eye witness to the loss of two pilots and an aircraft belonging to VS-41, and the United States Marine Corps.

The official report blamed the student pilot. Autopsy reports of the flight crew identified some form of cold/sinus medication in the bloodstream of the student Bronco pilot. According to the board of inquiry, this type of medication impaired the ability of the pilot to maintain control of the aircraft, resulting in the death of the student pilot and his instructor. Future use of this type of Rx prior to flight became prohibited.

That was that. I can still remember specific parts of that day, like they happened yesterday. Others, not as clear, as time has dulled minute details. However, I can still remember how beautiful and quiet the day was. The only aircraft in the pattern for quite a long time had been this single OV-10 Bronco, shooting touch and goes. Turning left into the pattern for landing on runway 29, gear down & locked, and on the power again just a second or so after the wheels impact the runway. A perfect day to continue the check ride and touch and go...

Since my assignment to RVAW-110, the RAG squadron at NAS North Island for the E-2 Hawkeye and the E-1B Tracer, I always found the OV-10 Bronco, with her green paint, tandem seats, short wings, and noisy as hell engines, to be somewhat of an enigma, compared to carrier ops. Still, she had the appearance of something rather fun to fly, especially since I had observed her maneuverability on several occasions during my assignment to E-2's. I can still clearly remember the buzz saw sound the OV-10 makes when taxiing, and going back to flight idle. Rather startling for such a small aircraft. It was this fascination that kept my eyes on every Bronco that worked the pattern, taxied by, or landed, when I was in a position to observe.

During the final moments leading up to the crash, I watched the aircraft bank left into the pattern after swinging out over the water. A normal touch & go, and back into the pattern procedure. I glanced away for a second, as I heard the aircraft come to life with a burst of power, and a slight nose high attitude. The power was pulled back almost immediately, and the port (left) wing dropped. Power again was applied with a hell of a lot of noise, bringing the attention of the aircraft to those standing on the ground who previously did not share my interest. The aircraft continued with a nose high attitude, until the nose was pushed down, and again power was added with a roar, and off again. The aircraft slowly leveled off, the slowest I had observed any aircraft in the final approach to that date. The left wing dropped, and I observed what appeared to be a large piece of the aircraft to blow upward and away, along with other smaller pieces. I did not realize what I had observed was the instructor pilot ejecting. When the port wing dropped, the ejection took place with the belly of the aircraft and the bottom of the wings exposed for a few seconds, blocking from view what the pieces were. Since I did not see a parachute and/or seat pan separation occur, I immediately thought I was witnessing a massive structural failure of the aircraft.

Seconds continued on forever, as the Bronco's left wing came back up, the nose again pitched up, and the wing again dropped as power was again added. This time though, when power was increased, the wing drop accelerated until the aircraft drifted way left of the centerline of the runway (29), and the aircraft continued into a roll and nose down attitude, striking the ground inverted, almost level now, with such a force, the student pilot's ejection seat was triggered.

I did not know for at least an hour or so, that the pieces falling away from the aircraft was in fact the instructor pilot. He died on the beach on impact. To this day, I am not sure why his ejection was not successful. Of course, I do not know if the Bronco had Martin-Baker ejection seats with "0" altitude potential or not. If they did, I am at a loss to comment why this specific ejection sequence was not successful. [OV-10 Bronco Association note: All OV-10As had LW-3B zero-speed, zero-altitude ejection seats. The ejection may have failed due to the attitude the aircraft was in, perhaps?]

The OV-10 came down with such force the aircraft fragmented, but did not explode, as it blew sand and debris onto a couple of chief petty officers who at the time of impact were in a permanent cabana structure located adjacent the Chief's Club. Needless to say, once their composure was regained, I can only assume their dispositions, along with their skivvies, were changed as their next priority.

I immediately jumped on a tow tractor parked idling in front of the airframe shop, and paused only long enough for several squadron personnel to join me on a cross field drive which seemed to take forever and resulted in the tractor being stuck in the sand. Many parts of North Island reminded me of Cam Rahn Bay. Lots of white/tan sand, and a little desolate. Needless to say, the rest of the journey to the crash site took place on foot. A wasted, exhausting effort, in attempt to save lives of two pilots who had already died. At least our hearts were in the right place.

I can still remember seeing their flight gear, now blossomed parachutes, and bent and shattered aircraft pieces, the largest consisting of the wings & vertical stabilizers and booms. Both pilot's helmets, with international orange tape applied in stripes going from front to back... stands out in my mind still today. All scattered in pieces in an empty hangar between RVAW-110 and VC-3, the P-2V Neptune squadron with enlisted pilots in her ranks who fired drones for fleet target practice.

A beautiful sunny weekend day ending in a sad, not making any sense type of an event, that brings sorrow even today over the lives of the two Marine pilots, who left us all much, much to soon, with so much left to accomplish.

I've tried to apply reason to these events. Perhaps the elimination & use of such cold/sinus medication(s) from active flight crews saved other lives and eliminated future catastrophic incidents. I'll never know. But I'll never forget those two Marine Bronco pilots. Training for their specialty, flying one of the most successful and unique aircraft of the Vietnam War, and all the while not knowing how special they really were and are. In quoting Marshall Harrison, it was "A Lonely Kind Of War."

If anyone knew them personally, or about them, I'd like to know more about their lives. All I know, even to this day almost 29 years later, is how they died.

In 2020, I got a letter from the widow of Tom Lange. I posted it here last year, but emails sent to me by Lt. Lange's classmates, Instructors and members of the Crash Investigation Board led me to the decision to take it down due to inaccuracies in the letter. For example, she wrote:

But why didn’t Tom eject when the plane was level? If he was so smart, so well trained in almost instantaneous processing, then why didn’t he pull the D ring between his legs and eject? He must have known that the ejection seat contained a 0’ height parachute since he had just gone through ejection seat qualifications at Miramar NAS. THE OV-10 DID NOT HAVE A D RING EJECTION SEAT HANDLE, only a face curtain method of ejection. Tom Lange FAILED the ejection seat qualification because his arms were too short to reach the D ring between his legs! He had ALWAYS practiced pulling the face curtain.
Men in the ready room at both training bases ritually practiced their preferred method of ejection again and again, until it was unconscious and second nature to them. What if Tom had taken the split second to reach IN THE WRONG DIRECTION when assessing his opportunity to eject? That is all the time he would have had before hitting the 3’ high sand mound.

At one point she stresses that OV-10 ejection seats were not equipped with 'D' Rings, and only had face curtains. As you can see in the picture, the North American LW-3B Ejection Seat had a 'D' Ring to initiate ejection with, and did not have a face curtain.

As an AME (Ejection Seat Technician), I can verify that the LW-3B seats in our Broncos were fired with a 'D' ring and not a face curtain.

Below you will find a link to her letter if you want to read it.


Bob'z Note: I recently learned even more of the story. Lt. Leebern and Lt. Lange had been in the landing pattern at North Island for runway 29 on the downwind leg when the aircraft suddenly rolled inverted and pitched nose down into a near-vertical dive at the 1,000’ pattern altitude. Both ejected, but neither got seat-man separation.

During the investigation a few days after the accident one of the Navy OV-10 Instructor Pilots and a North American test pilot took one of the squadron OV-10s out and began performing maneuvers at 10,000 feet that might have led to the 'unintended departure' from normal flight. Nothing they did resulted in the uncontrolled flight characteristic of the crash.

On the second flight, the pilot began configuring for landing according to NATOPS procedures while performing landing pattern procedures at 10,000’, but adding mistakes that a new pilot might possibly make.

On one attempt, as the plane began to slow to flap extension speed, he lowered the flaps to “FULL” before retracting them back to the “T/O” position. The aircraft immediately rolled inverted and pitched nose down 70-80 degrees. It took more than one thousand feet to recover. If they had been at pattern altitude, the crash would most likely have been duplicated as well.

They repeated the process with the same result. North American had never experienced this fault in any flight testing nor had any user ever experienced this during operations. The investigation found the flaw, but for some reason it is not mentioned in the crash report.