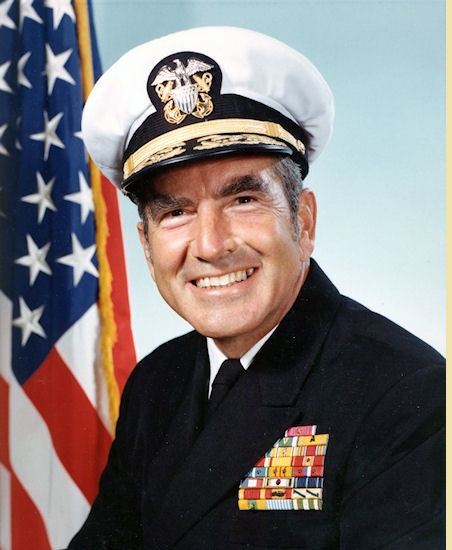 Elmo Russell Zumwalt Jr. was born Nov. 29, 1920 in San Francisco, California and spent his childhood in the small community of Tulare. The original plan was for him to follow in his parent's footsteps and become a doctor, but those plans changed in 1939 when he was accepted into the United States Naval Academy.

He graduated from the academy in June 1942 as a part of the accelerated Class of 1943. In 1942 as World War II swept across the Pacific, Ensign "Bud" Zumwalt was assigned to the destroyer USS Phelps (DD 360). His second ship, the USS Robinson (DD 562), on which he earned a Bronze Star with Valor for his actions during the Battle of Leyte Gulf on October 25, 1944.

At the end of the war, Zumwalt was named "prize crew captain" of the Imperial Japanese gunboat 'Ataka' a 1,200-ton Japanese river gunboat with a crew of 200. In this capacity, he took the first American-controlled ship since the outbreak of World War II up the Huangpu River to Shanghai, China. There, they helped to restore order and assisted in disarming the Japanese.

While in China, he was asked to a dinner at a Russian household where he met his would-be bride, Mouza Coutelais-du-Roche. After having only known her for about two weeks, Bud married Mouza Oct. 22, 1945.

Prior to Zumwalt's becoming Commander - Naval Forces Vietnam, the various riverine forces were not fully effective in combatting the Viet Cong. Admiral Zumwalt combined all of the compartmentalized forces into Task Force 194 or "Operation Sealords."

In 1970, as Chief of Naval Operations he began his term by implementing

When he was tapped as the 19th Chief of Naval Operations at 49 years old, Admiral Zumwalt became the youngest officer ever named to the post. His tour was one of sweeping changes within the Navy. He became CNO as defense spending was declining while the fleet was steadily aging. He saw it as his job to ensure the Navy remained capable of meeting the Soviet threat. That included implementing "Project Sixty," a "High-Low mix" plan for retiring, sometimes ahead of schedule, obsolete large single-platform vessels while keeping a higher number of smaller multi-platform ships in the fleet. At the same time, he had to enable an overextended Navy to continue to meet mission requirements, acquire affordable equipment, and ensure lifecycle costs to make it possible to adequately man, train, equip, and maintain the force. The result was a number of new programs that had lasting impacts on the warfighting readiness of the Navy. MORE...

Admiral Zumwalt began his job to “modernize and humanize the Navy,” through numerous progressive personnel programs. To articulate his position on the changes he planned, Admiral Zumwalt implemented a series of naval messages given the moniker “Z-Grams” (List: # 1 thru 120). He released his first Z-Gram the day he took office with 91 following in his first year as CNO. A total of 121 Z-Grams addressing personnel matters that Admiral Zumwalt described as “Mickey Mouse” issues that he believed were partially responsible for plummeting retention of a force attained through the draft. Reversing that trend was one of his top priorities. On November 10, 1970, he released Z-57. In it, he advised the fleet of the Navy's:

DEMEANING OR ABRASIVE REGULATIONS, ELIMINATION OF

1. THOSE DEMEANING OR ABRASIVE REGULATIONS GENERALLY REFERRED TO IN THE FLEET AS "MICKEY MOUSE" OR "CHICKEN" REGS HAVE, IN MY JUDGMENT DONE ALMOST AS MUCH TO CAUSE DISSATISFACTION AMONG OUR PERSONNEL AS HAVE EXTENDED FAMILY SEPARATION AND LOW PAY SCALES. FOR THIS REASON, SHORTLY AFTER TAKING COMMAND I REQUESTED A COMPREHENSIVE REVIEW OF CURRENT NAVAL POLICIES AND REGULATIONS. I DESIRE TO ELIMINATE MANY OF THE MOST ABRASIVE POLICIES, STANDARDIZE OTHERS WHICH ARE INCONSISTENTLY ENFORCED, AND PROVIDE SOME GENERAL GUIDANCE WHICH REFLECTS MY CONVICTION THAT IF WE ARE TO PLACE THE IMPORTANCE AND RESPONSIBILITY OF "THE PERSON" IN PROPER PERSPECTIVE IN THE MORE EFFICIENT NAVY WE ARE SEEKING, THE WORTH AND PERSONAL DIGNITY OF THE INDIVIDUAL MUST BE FORCEFULLY REAFFIRMED. THE POLICY CHANGES BELOW ARE EFFECTIVE IMMEDIATELY AND WILL BE AMPLIFIED BY MORE DETAILED IMPLEMENTING DIRECTIVES TO BE ISSUED SEPARATELY.

A. IT APPEARS THAT MY PREDECESSOR'S GUIDANCE IN MAY ON THE SUBJECT OF HAIRCUTS, BEARDS AND SIDEBURNS IS INSUFFICIENTLY UNDERSTOOD AND, FOR THIS REASON, I WANT TO RESTATE WHAT I BELIEVED TO BE EXPLICIT: IN THE CASE OF HAIRCUTS, SIDEBURNS, AND CONTEMPORARY CLOTHING STYLES, MY VIEW IS THAT WE MUST LEARN TO ADAPT TO CHANGING FASHIONS. I WILL NOT COUNTENANCE THE RIGHTS OR PRIVILEGES OF ANY OFFICERS OR ENLISTED MEN BEING ABROGATED IN ANY WAY BECAUSE THEY CHOOSE TO GROW SIDEBURNS OR NEATLY TRIMMED BEARDS OR MOUSTACHES OR BECAUSE PREFERENCES IN NEAT CLOTHING STYLES ARE AT VARIANCE WITH THE TASTE OF THEIR SENIORS NOR WILL I COUNTENANCE ANY PERSONNEL BEING IN ANY WAY PENALIZED DURING THE TIME THEY ARE GROWING BEARDS, MOUSTACHES, OR SIDEBURNS

B. I VIEW THE PROHIBITION AGAINST THE WEARING OF CLEAN, NEAT WORKING UNIFORMS OR DUNGAREES TO AND FROM WORK AS UNWARRANTED AND I NOW DIRECT THAT IT BE SUSPENDED FOR THE CONVENIENCE OF ALL CONCERNED.

C. TO STANDARDIZE CURRENT PRACTICES, WORKING UNIFORMS, DUNGAREES, AND FLIGHT SUITS ARE AUTHORIZED IN ALL NAVAL COMMISSARIES. EXCHANGES, SNACK BARS, DISPENSARIES, DISBURSING OFFICES, AND OTHER SERVICE TYPE FACILITIES, AND NO ONE WILL BE DENIED ENTRANCE FOR BEING IN THE "IMPROPER" UNIFORM, ASSUMING THOSE WORN ARE CLEAN, NEAT, AND IN GOOD CONDITION. BASE COMMANDERS WILL REVIEW SIMILAR RESTRICTIONS APPLICABLE TO DEPENDENTS AND ADOPT REGULATIONS CONSISTENT WITH CURRENT FASHIONS.

D. THE REQUIREMENT FOR OFFICERS AND MEN TO SHIFT INTO THE UNIFORM OF THE DAY FOR THE EVENING MEAL WILL BE DISCONTINUED, EXCEPT FOR CEREMONIAL OR OTHER SPECIAL OCCASIONS OR BY DECISION OF THE GROUP OF PERSONNEL INVOLVED.

F. WHERE OPTIONAL UNIFORMS ARE SPECIFIED BY THE AREA COMMANDER, THIS WILL MEAN OPTIONAL TO THE INDIVIDUAL AND NOT TO THE LOCAL COMMANDS, EXCEPT FOR SPECIAL OCCASIONS, SUCH AS INSPECTIONS, WHERE UNIFORMITY IS REQUIRED.

G. WHEN VISITING FLEET UNITS, I NOT ONLY DO NOT WISH TO SEE FRESH, PAINT APPLIED STRICTLY BECAUSE OF MY VISIT BUT CONSIDER THAT RUSTED SURFACES HASTILY PAINTED OVER ARE A REFLECTION OF POOR COMMAND DISCRETION. THIS TYPE OF PREPARATION FOR ANY SENIOR OFFICER VISIT SHALL BE PROHIBITED.

H. THE REQUIREMENTS TO CERTIFY THE POSSESSION OF SUFFICIENT FUNDS OR TO ACKNOWLEDGE GEOGRAPHICAL LIMITATIONS FOR LEAVE {EXCEPT FROM VIETNAM WHERE SPECIAL REGULATIONS APPLY} OR LIBERTY PURPOSES, TO PRODUCE PERSONAL PROPERTY PASSES, OR TO SHOW CERTIFIED PERMISSION TO BE AWAY FROM DUTY STATION {WALKING CHITS} PRESUPPOSES A GENERALIZED IRRESPONSIBILITY WHICH I DO NOT ACCEPT, AND THESE REQUIREMENTS WILL BE ELIMINATED.

I. IN VIEW OF THE REQUIREMENT FOR SPECIAL PRECAUTIONS FOR OPERATING MOTORCYCLES, SAFETY REGULATIONS MUST BE STRICTLY ENFORCED; HOWEVER, MOTORCYCLES SHOULD BE PERMITTED ENTRY AND ACCESS TO ALL NAVAL FACILITIES UNDER THE SAME CONDITIONS AS FOR AUTOMOBILES, AND CONVENIENT MOTORCYCLE PARKING AREAS WILL BE PROVIDED. FURTHERMORE, SO LONG AS THE HEAD GEAR MEETS SAFETY STANDARDS, NO MOTORCYCLE OPERATOR SHOULD IN ANY WAY BE PENALIZED OR DENIED ENTRY BECAUSE OF THE COLOR OF HIS HEAD GEAR.

J. OVERNIGHT LIBERTY WILL NOT BE TREATED AS A PRIVILEGE FOR WHICH A SPECIAL REQUEST CHIT MUST BE SUBMITTED, BUT RATHER AS THE NORMAL FORM OF LIBERTY FOR OUR RESPONSIBLE SAILORS. EXCEPTIONS TO THIS POLICY WOULD BE MADE ONLY FOR EXTRAORDINARY CIRCUMSTANCES SUCH AS GOVERNMENT IMPOSED CURFEW OR EXTREMELY UNSATISFACTORY ENVIRONMENT, AND THEN ONLY UPON DETERMINATION OF THE SENIOR OFFICER PRESENT.

K. THE REQUIREMENT FOR LINE HANDLERS, REFUELING PARTIES, TOPSIDE WATCH STANDERS IN INCLEMENT WEATHER, BOAT CREWS IN HEAVY WEATHER, AND OTHERS WHO ARE ENGAGED IN WORK WHICH WOULD UNDULY SOIL OR DAMAGE SUCH UNIFORMS, TO PERFORM THE JOBS IN WHITES OR BLUES IS UNREASONABLE AND IS TO BE DISCONTINUED, EXCEPT FOR MOST UNUSUAL CEREMONIAL OCCASIONS.

L. THE OCCASIONAL PRACTICE OF REFUSING TO FORWARD A REQUEST FROM AN INDIVIDUAL TO HIGHER AUTHORITY WILL BE DISCONTINUED. IF PERSONNEL IN THE CHAIN HAVE GOOD REASON FOR NOT RECOMMENDING APPROVAL OF A REQUEST, THEY SHOULD, OF COURSE, SO STATE, BUT THEY MUST FORWARD IT EXPEDITIOUSLY ONE WAY OR ANOTHER.

M. I AM NOT SUGGESTING THAT A MORE LENIENT ATTITUDE TOWARD IRRESPONSIBLE BEHAVIOR BE ADOPTED, BUT I DO BELIEVE THAT WE CANNOT PERMIT GENERAL POLICIES TO BE DICTATED BY THE NEED, WHICH I SUPPORT, TO CONSTRAIN THOSE FEW INDIVIDUALS WHO DO NOT RESPOND TO THE TRUST AND CONFIDENCE EXPRESSED IN MORE FLEXIBLE AND LESS RESTRICTIVE REGULATIONS.

Following his term as CNO, Zumwalt retired from the Navy. His son, Lt. Elmo Zumwalt III, who had served under his father during the Vietnam War, was diagnosed with cancer and died. Zumwalt believed it to be related to the use of Agent Orange during the war. Through his retirement years, Zumwalt worked to get benefits for veterans affected by defoliants.

Elmo Zumwalt passed away Jan. 2, 2000. His legacy lives on in the ship that bears his name, USS Zumwalt (DDG 1000). Mirroring the actions of her forbearer, the ship aims to change the Navy, both tactically and socially in regard to Sailors' quality of life. The Navy plans to christen Zumwalt, April 12, 2014.